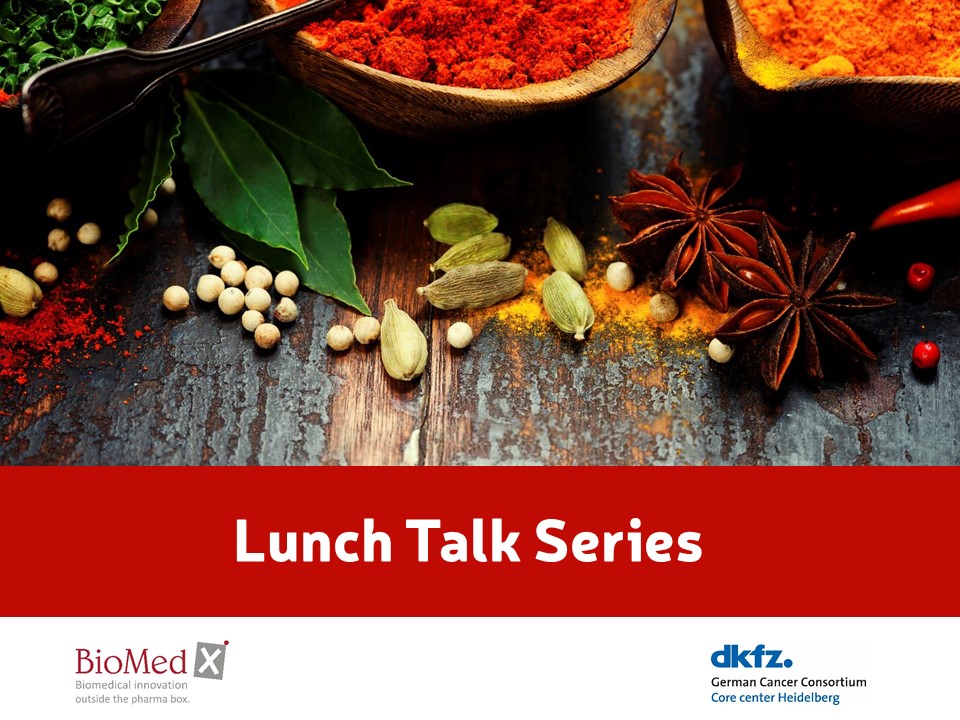 Heidelberg, Germany, September 28, 2015 – The BioMed X Innovation Center and the DKFZ PostDoc Network announced today that they will launch a new event series called “Lunch Talk Series” to be held at the DKFZ Communication Center in Heidelberg starting on October 12, 2015.

The purpose of the monthly “Lunch Talk Series” is to invite top scientists from all around the world to speak about their most recent research and to encourage the scientific community on the life science campus of the University of Heidelberg to network and discuss science.

Each “Lunch Talk” will start at 11:00 a.m. with a scientific presentation in one of the research areas of the BioMed X Innovation Center: cell biology, immunology, bioinformatics, neuroscience, epigenetics, and nanomaterials. In line with the topic, each “Lunch Talk” will be hosted by one of BioMed X’s research group leaders and by the DKFZ PostDoc Network.

The talk will be followed at 12:00 p.m. by a sponsored walking lunch for all participants in order to encourage informal discussions and cross-institutional exchange. Participation is free of charge and open to all researchers and students in the field of life sciences.

The first “Lunch Talk” will be held on October 12, 2015. Stefan Knapp of the Goethe University Frankfurt and member of the German Cancer Consortium (DKTK: www.dkfz.de/de/dktk) will give a talk on “Strategies for the design of selective kinase chemical tools and their role in target validation”. Host of the October event will be Simone Fulle, leader of BioMed X’s bioinformatics group in the field of selective kinase inhibitors, sponsored by Merck Serono.

In the “Lunch Talk Series”, group leaders from BioMed X Innovation Center and the PostDoc Network of the German Cancer Research Center invite renowned life science researchers to join them for a scientific exchange.

In Vivo: R&D meets the crowdscape – BioMed X looks outside for insight (April 2019)

Nature: How researchers are ensuring that their work has an impact (April 2018)

Plos Biology: Establishing a reliable framework for harnessing the creative power of the scientific crowd (February 2017)